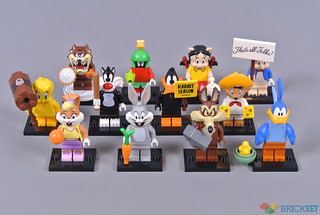 LEGO has kindly provided the missing character to complete our review of 71030 Looney Tunes Collectable Minifigures.

Wile E. Coyote has deployed countless Acme products when attempting to ensnare the Road Runner, famously including anvils. An anvil therefore accompanies this minifigure, comprising four pieces and resembling past anvils throughout the Castle range. This accessory works for the character, although something more outlandish and displaying Acme branding might have been preferable.

Wile E. Coyote definitely maintains the brilliant standard established by 71030 Looney Tunes Collectable Minifigures. I appreciate the consistent design between characters, including their unique heads and comparatively simple printing which reflects the animation style. However, I think Wile’s accessory could have been improved and the same is true for several characters.

Our review of the other eleven minifigures and extended summary is available here.

This minifigure was provided for review by The LEGO Group but the review represents an expression of my own opinions.