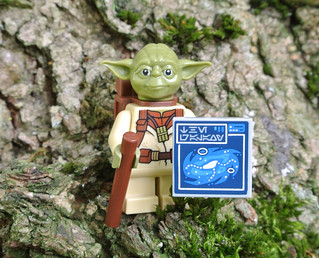 In addition, the decorated galactic map appears appealing and should prove more versatile than the specialised Jedi Master.

Yoda minifigures exhibit inevitable consistency between sets, since the character’s onscreen appearance hardly changes between movies. This exclusive design is accordingly interesting, wearing a reddish brown backpack and belt over shabby robes. The consistency between this minifigure and the equivalent from 75208 Yoda’s Hut seems suitable, as both versions include Yoda’s blissl around his neck.

While the minifigure is adequate, the accompanying galactic map provides greater appeal for me! This component features relatively simple decoration, with Aurebesh reading ‘The Galaxy’ above the actual map. I suspect the major routes and circled locations were chosen at random, but these rings could identify Ilum and Tatooine based upon their positions. Yoda also carries a camera alongside his familiar gimer stick.

Yoda’s Galaxy Atlas encompasses 25 different planets from throughout the whole Star Wars saga, commencing with those nearest the core before continuing through the Outer Rim and reaching the Unknown Regions. The layout is excellent and I appreciate the fun graphic style, which is obviously intended to appeal to children but appeals to me too!

Information about each major planet and its inhabitants is definitely abridged, although using posters and reviews to convey additional information is clever. The commentary from Yoda is splendid too, despite occasionally dubious editing where the Yoda minifigure has been added without actually interacting with the models shown.

While many planets receive a single page spread, the most important locations are described across several pages. For instance, Tatooine is subdivided between Mos Eisley, the Jundland Wastes and the Dune Sea. I was interested to learn how alien species without previous LEGO representation would appear. Unfortunately, the likes of Kaminoans or Aki-Aki are portrayed by simplified images from the films, rather than resembling minifigures.

Yoda’s Galaxy Atlas is definitely intended for children and should appeal to that demographic, omitting blocks of text in favour of fun graphics. Of course, the associated minifigure provides greater interest for older LEGO Star Wars fans. Alternative characters may have proven more desirable, but Yoda seems appropriate because this Jedi Master has explored myriad planets throughout his nine hundred year lifespan!

Furthermore, the printed galactic map looks marvellous and is my favourite aspect of the book or minifigure, as expected. The retail price of £12.99 or $14.99 feels expensive, although these LEGO books are always discounted and Yoda’s Galaxy Atlas is currently available from Amazon for £8.85 in the UK and $13.49 in the USA.

Which minifigure, unlikely to appear in standard sets, would you most like to accompany a future LEGO Star Wars book? Let us know in the comments.