LEGO NINJAGO’s collection of city sets has included several known and original locations from the TV show and beyond, but we’ve got a few we’d love to see in another model.

With an additional expansion for NINJAGO city rumoured for 2022, we’re delving deep into more of the original locations from the TV series as well as some other ideas for another instalment of the multi-tiered sets.

With a combination of sites from the various seasons of NINJAGO to professions and places represented only a few times before in bricks, even those unfamiliar with the show will recognise at least one of these suggestions.

A minifigure-scale dedicated LEGO aquarium set is something that the LEGO Designers have yet to produce, although this year has seen the launch of a large display in Creator 41122 Fish Tank. With the crowded design of the NINJAGO city sets so far, we can’t imagine such a site taking up much space but a public exhibit filled with all kinds of coral and sea life could fit within a modular expansion.

So far, every NINJAGO city expansion model has included at least one villain to antagonise the citizens, from Lord Garmadon himself to a flying thief, the megalopolis could do with somewhere to keep them once apprehended by the ninjas. Office Noonan of 70620 NINJAGO City might need a precinct of her own to do just that and such a build could range from a small booth to a full prison.

71741 NINJAGO City Gardens combined a decent amount of greenery with the manic cityscape, but for a set named as a garden, we’d love to see a little more of nature taking back the buildings surrounding it. Vines and moss winding into the industrial skyline could achieve this effect, similar to how the cherry blossom tree in 70620 NINJAGO City sprouts through the scaffolding. We can imagine the LEGO Designers integrating some of the techniques used in the Botanical Collection too.

Seemingly included in the concept model for 71741 NINJAGO City Gardens, Borg Tower is the home of NINJAGO’s resident genius inventor Cyrus Borg. The unique building has become an icon of NINJAGO City in the show, even being constructed on the site of the final battle. The lack of any kind of representation for Borg Tower in the NINJAGO City sets might seem puzzling, so could the rumoured 2022 expansion be the chance we’ve been waiting for?

The Explorer’s Club is a more recent addition to the world of NINJAGO as part of some later seasons of the show. This unique location houses the collections and displays of many intrepid adventurers, including the familiar Clutch Powers. We can imagine a module for this building in a NINJAGO City expansion playing a similar role to the museum in 71741 NINJAGO City Gardens, but with the blue roof and brickwork contrasting the exterior design.

Most may not know that LEGO NINJAGO is just one minifigure off completing a collection of characters that began with the very first sets of the theme. The Elemental Masters are a group of individuals who can harness the chaotic and creative natural powers of NINJAGO to fight for good or evil. Chamille, master of form, is the only character left to finish the group and what better place to include her than in another NINJAGO City expansion? 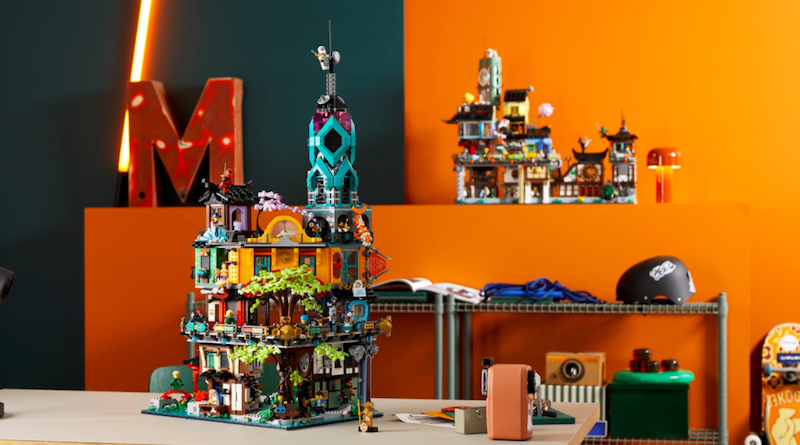