Our recent article about minifigures sparked discussion about what a minifigure actually is.

As you probably know, we are permitted to use BrickLink’s minifig catalogue on the site here, so we are at the mercy of its administrators when it comes to deciding what is and isn’t in it.

Recently the scope of what constitutes a ‘minifig’ there has broadened to include things like this crane from Duplo Thomas the Tank Engine which I think most would agree stretches the definition somewhat. Taking that line of reasoning to its logical conclusion, every Bionicle character could be classified as a ‘minifig’ and probably licensed BrickHeadz too, given they too are named brick-built characters.

There are other inconsistencies in the site’s definition, too. Take the figures in 7789 Lotso’s Dump Truck for example. Chunk is considered to be a minifig, but Lotso and Stretch are not, whereas other similar characters such as Angry Birds are.

Anyway, the point of this article is to encourage discussion ahead of us potentially going through all the ‘minifigs’ currently in the database and deciding whether they are actually minifigs, as most people would understand them, or something else entirely, so that unwanted ones can be filtered out of lists if desired.

LEGO’s definition of what constitutes a minifigure is given in the book I love that Minifigure:

Most minifigures are made from three standard parts: head, torso and legs, and any LEGO character that doesn’t include at least two of those parts doesn’t get to call itself a minifigure.

The book gives examples of figures that are not considered to be minifigs, such as battle droids, R2-D2, mini-dolls, big-figs and skeletons, which are therefore not included in the book. However, contradictory to that, njo060 Pythor is included in it, despite having one of the required parts, a torso.

Clearly it’s a grey area, then, and I think most users of the Brickset database would expect to see the likes of R2 units, battle droids, skeletons and sim005 Maggie Simpson classified as minifigs, even if they are not officially considered to be one by that definition.

So, we need to come up with our own definition.

Other types of figure

Before considering our definition of a minifigure, there are certain categories of figure in our database which are definitely not one:

None of the above exist in the same ‘universe’ as Minifigs and never interact with them. Other than Duplo they are no longer produced.

Another type of figure that are definitely not minifigs are mini-dolls:

How should we define a minifgure?

What I’d like to do is assign each figure in the database a type, which initially would be one of three:

In time, ‘Other’ may be broken down further, but before we can do that we need to decide exactly what is a minifigure so that we also know what isn’t one.

Using LEGO’s definition as a basis, it is safe to label every figure that has two of the three required parts as a ‘minifigure’. However, there are many edge cases that do not fit that definition but which most people would consider to be one.

Let’s use Trolls World Tour figures as an example. Open the link in a new tab for reference. If you were viewing that list and wanted to see only ‘minifgures’, which ones would you expect to see?

From my point of view there are three types of figure among the Trolls, one of which I consider to be a minifig, one which I wouldn’t, and one I am not sure about:

So, maybe our definition for a minifigure is as follows:

A figure constructed using at least two standard minifigure elements, or any figure whose form does not lend itself to being portrayed using them, so is made up of specialist elements.

The key word being specialist, rather than general purpose.

By that definition Tiny Diamond is a ‘minifig’ although I’m still not convinced that it should be.

Which Star Wars characters are minifigs? 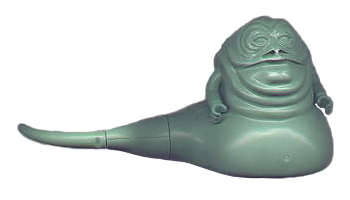 Let’s consider some Star Wars figures, starting with sw0071: Jabba the Hutt. His form does not suit standard minifigure parts so has been made from specialist ones, so he could fit the definition above. Would the majority of people expect to see him in a list of Star Wars minifigures? I’m not sure.

What about R2 units? Minifigure or not? They are made from now-standard LEGO elements, but the dome, legs and body were designed specifically for them in 1999, so arguably they should be considered to be minifigures.

LEGO does not consider battle droids to be minifigs, but I would, because its form requires specialist elements.

Brick-build droids such as sw0037: Pit Droid are definitely not minifigs, whereas sw0151: IG-88 probably is, because it’s made mostly of specialist parts.

As you can probably tell by now, it’s not easy coming up with a watertight definition and I welcome your input. Perhaps the consensus will be that we can’t reach a consensus on a definition and trying to label them in the database is not worth the effort!